A predictable cup ending for disorganized Old Boyz against Partizani

A cup game against opponents who had been previously beaten by the Old Boyz looked promising, but with CPR there was no sure thing.  The previously dreadful Con Ed field had been completely resodded and was now an actual respectable grass field.  The slow style of play should have benefited the Old Boyz in keeping possession, but as usual despite having an abundance of room on the wings instead of working the ball back towards the middle of the field they kept lobbing the ball into the area for one of the numerous defenders to clear.  Bustamante did hit the post from a nice run, but was unable to build on it after pulling his hamstring on a run down the left hand side.

Plenty of domination but no conversion, pretty much the story of the season.  In the second half there was even more room down the flanks, but Partizani started attacking with purpose themselves.  A breakthrough came for CPR with new on call player Michael Gleason taking advantage of his surprise debut start ahead of the veterans by smashing a ball on the turn into the upper 90.  Another deep cross found Walby all alone on the far side and it took a great effort by the keeper to turn the ball onto the bar and away.

Numerous wide open opportunities on the flanks were wastefully squandered, with the simple pass somehow escaping players no matter how much time they had.  Leaving a competent attacking team like Partizani a chance was never a good thing, and almost inevitably one of their two strikers in the box finished despite being surrounded to tie the game.

Although the game went straight to penalties none had been practiced before the game, and neither were all the penalty takers on the field at the usual early whistle.  Partizani missed only one of their penalties while CPR had one missed (Hollins) and one saved (Stower).  Jones & Morse finished both of theirs but it was not enough.  As disappointing a loss as the Old Boyz have had in a long time, and their first this season.

”Mr. Glass” Fragility/Old Man Injury Award: Paulo Bustamante limped off with a hamstring injury that looks sure to put him on the shelf for awhile, a tough blow for the Old Boyz.

Old Man of the Match: Lars Murray turned back the years with a vintage performance.  Anyone would think he was only in his early forties, the way he closed down his side of the field and distributed the ball.  An honorary mention to the new guy Michael Gleason with some good running and a great debut goal.

Old Man of the Bar: None

El Presidente (new award for Old Men who don’t make it to game but come to the bar): None, although Edmunds did make it back to the bar.

The Whites Reserves advanced to the next round of the State Cup on Sunday with a convincing result against the NYPD.  The Reserves were in complete control of the game from the get go with Steve Murray scoring in the first few minutes.  This was Muzza’s first game as captain in Toph’s absence, and the goals kept coming as he finished with a hat-trick.  Also scoring two goals a piece were Chris Norelli, Dan Riso, and Dan Coccaro.  The Whites Reserves had the lop sided majority of possession with NYPD hardly being able to get into our half let alone create any chances.  The final score was 8-1.

Women’s White advance thanks to a Phoenix forfeit

The firsts made hard work of this cup tie against a poor but dogged team from Long Island. We controlled the first half but could not get through the bus that College Point parked in front of their goal. Still, we didn’t get frustrated and early on in the second half found the important breakthrough as Andy’s lazer like shot from distance found the corner of the net, giving the keeper no chance. With College Point now needing to chase the game we found more space and scored two more in quick succession, well taken goals by Kyle and Dave. But at this point we took our foot off the pedal and made the last 15 minutes much harder work, as we conceded two quick goals, the second from the penalty spot. We were barely holding on as the final whistle saw that we entered the hat into the next round.

The firsts lost heavily to NYAC on both occasions last season and knew that we had to put in a strong and determined performance this time to get anything out of the game. And that is what we produced, as the first half was a fairly even affair mostly battled in midfield, though Ben did come up with one fantastic save to keep the game tied. We came out stronger in the second period, controlling more of the possession and stretching the NYAC defense at times. And on one of those times, Manny broke through and saw his shot parried by the keeper to Kyle, who coolly slotted it in under the keeper from a tight angle to the back of the net. With about 20 minutes to go we expected an onslaught, but continued to play some good possession football. NYAC did send out a warning with a free-kick at the edge of the area that struck the bar… and in the last minute of the game they were unfairly awarded another free-kick from a similar area, and this time the ball found the top corner. It was a heartbreaking way to end the game, but you should all be proud of the level of play and effort you put into the game, and that against NYAC this is still a very decent result.

State Cup for Adults (not really, check out the pic)

Far off in New Utrecht land, it was looking pretty bleak just 10 minutes before gametime.  With the field and bathrooms still chained and locked, the 5 players that arrived early got a great pre-game warm-up (see picture below), but found themselves staring off towards the Coney Island bound trains and envisioning 6 more girls in RED uniforms parading down the subway steps.  That was just a dream of course, as only 3 more arrived – just enough to play, yay? 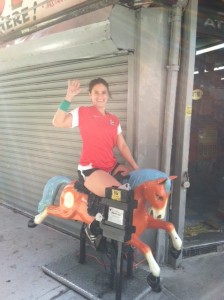 A true team effort followed, with volunteers in goal (that managed diving saves, big thanks to Hilder and Emmakate!), brilliant passing upfield, solid ZONE defense and offensive attacks that mustered up 2 goals in the first half.  The first goal started in the back (there was no midfield) with a pass to Platt in the corner who found Jill across the goal.  Platt, stopped in her tracks (forget follow up when you have 8 players) and yelled “come on Jill, COME ON” to which Jill responded with her one-on-one magic to put one away in the corner of the net.  The second goal came off a Casey B. assist back to the 18 yard line, I (Nabb) chipped the goalie…on purpose, sure.

The second half started strong as well, with our very own Golden Boot Platt turning and volleying into the back of the net.  As exhaustion and a bit of complacency set in, the last 10 minutes of the game got a little dicey so….we let in 2 goals before the final whistle blew.

In the end we got the W…on to the next round of State Cup!

The good news is that we broke our tying streak against the Reds, the bad news is that we lost. The Red/White game was evenly matched, but unfortunately this time the Reds got the breaks and took a 2-0 lead in the second half. Maybe we need a better half-time speech?

MVP = Kelly Sanders in goal
Sadly, the Reds also had better bar attendance, but we had a pretty good showing!

The Whites Reserves lost a tight one to NYAC on Sunday.  The match was mostly a midfield battle with neither team creating much in terms of clear cut chances.  The first half was pretty evenly contested with some intense play and hard fouls from both sides.

NYAC stumbled into a goal after gaining possession in the CPR defensive third early in the second half.  NYAC crossed the ball from the left corner and a header from about the PK spot  found the top of the net.  In the last 20 minutes the CPR Reserves pushed on and found most of the possession creating chances with a few shots from distance, but were unable to make a break through.  Final score 1-0.

A special thanks to Stu for filling in in goal.

Its State Cup games all around this weekend – good luck all!!